Are emergence and microfoundations contraries? 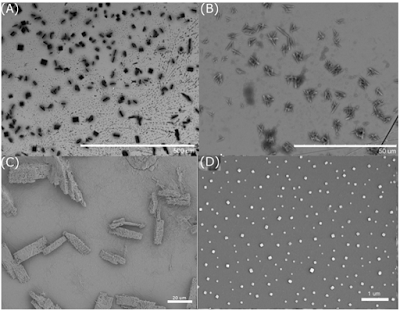 image: micro-structure of a nanomaterial (link)
Are there strong logical relationships among the ideas of emergence, microfoundations, generative dependency, and supervenience? It appears that there are. 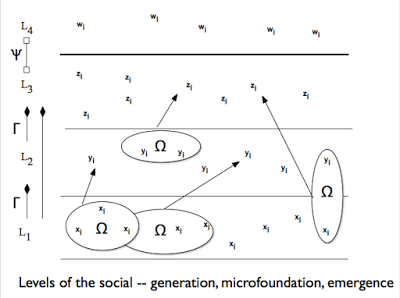 The diagram represents the social world as a laminated set of layers of entities, processes, powers, and laws. Entities at L2 are composed of or caused by some set of entities and forces at L1. Likewise L3 and L4. Arrows indicate microfoundations for L2 facts based on L1 facts. Diamond-tipped arrows indicate the relation of generative dependence from one level to another. Square-tipped lines indicate the presence of strongly emergent facts at the higher level relative to the lower level. The solid line (L4) represents the possibility of a level of social fact that is not generatively dependent upon lower levels. The vertical ellipse at the right indicates the possibility of microfoundations narratives involving elements at different levels of the social world (individual and organizational, for example).
We might think of these levels as "individuals," "organization, value communities, social networks," "large aggregate institutions like states," etc.
This is only one way of trying to represent the structure of the social world. The notion of a "flat" ontology was considered in an earlier post (link). Another structure that is excluded by this diagram is one in which there is multi-directional causation across levels, both upwards and downwards. For example, the diagram excludes the possibility that L3 entities have causal powers that are original and independent from the powers of L2 or L1 entities. The laminated view described here is the assumption built into debates about microfoundations, supervenience, and emergence. It reflects the language of micro, meso, and macro levels of social action and organization.
Here are definitions for several of the primary concepts.

We also can make an effort to define some of these concepts more formally in terms of the diagram.

Consider these statements about facts at levels L1 and L2:
Here are some of the logical relations that appear to exist among these statements.
On this analysis, the question of the availability of microfoundations for social facts can be understood to be central to all the other issues: reducibility, emergence, generativity, and supervenience. There are several positions that we can take with respect to the availability of microfoundations for higher-level social facts.
In other words, it appears that each of the concepts of supervenience, reduction, emergence, and generative dependence can be defined in terms of the availability or inavailability of microfoundations for some or all of the facts at a higher level based on facts at the lower level. Strong emergence and generative dependence turn out to be logical contraries (witness the final two definitions above).


- Do We Still Need Microfoundations?
For quite a few years I have found the concept of microfoundations to be central for thinking about relationships across levels of social and individual activity. Succinctly, I have argued that, while it is perfectly legitimate to formulate theories...

- Microfoundations 2.0?
I  Figure. An orderly ontological hierarchy (University of Leeds (link) Figure. Complex non-reductionist social outcome -- blight The idea that hypotheses about social structures and forces require microfoundations has been around for at least 40...

- Kaidesoja On Emergence
Tuukka Kaidesoja's recent book Naturalizing Critical Realist Social Ontology devotes a chapter to the topic of emergence as it is treated within critical realism. Roy Bhaskar insisted that the assumption of emergence was crucial to the theory...