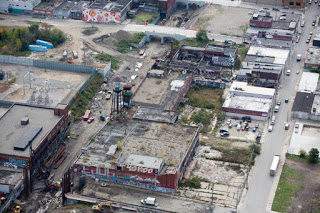 Figure. Complex non-reductionist social outcome -- blight
The idea that hypotheses about social structures and forces require microfoundations has been around for at least 40 years. Maarten Janssen?s New Palgrave essay on microfoundations documents the history of the concept in economics; link. E. Roy Weintraub was among the first to emphasize the term within economics, with his 1979 Microfoundations: The Compatibility of Microeconomics and Macroeconomics. During the early 1980s the contributors to analytical Marxism used the idea to attempt to give greater grip to some of Marx's key explanations (falling rate of profit, industrial reserve army, tendency towards crisis). Several such strategies are represented in John Roemer's Analytical Marxism. My own The Scientific Marx (1986) and Varieties of Social Explanation (1991) took up the topic in detail and relied on it as a basic tenet of social research strategy. The concept is strongly compatible with Jon Elster's approach to social explanation in Nuts and Bolts for the Social Sciences (1989), though the term itself does not appear  in this book or in the 2007 revised edition.

Here is Janssen's description in the New Palgrave of the idea of microfoundations in economics:

In The Scientific Marx the idea was formulated along these lines:

Marxist social scientists have recently argued, however, that macro-explanations stand in need of microfoundations; detailed accounts of the pathways by which macro-level social patterns come about. (1986: 127)

The requirement of microfoundations is both metaphysical -- our statements about the social world need to admit of microfoundations -- and methodological -- it suggests a research strategy along the lines of Coleman's boat (link). This is a strategy of disaggregation, a "dissecting" strategy, and a non-threatening strategy of reduction. (I am thinking here of the very sensible ideas about the scientific status of reduction advanced in William Wimsatt's "Reductive Explanation: A Functional Account"; link).

The emphasis on the need for microfoundations is a very logical implication of the position of "ontological individualism" -- the idea that social entities and powers depend upon facts about individual actors in social interactions and nothing else. (My own version of this idea is the notion of methodological localism; link.) It is unsupportable to postulate disembodied social entities, powers, or properties for which we cannot imagine an individual-level substrate. So it is natural to infer that claims about social entities need to be accompanied in some fashion by an account of how they are embodied at the individual level; and this is a call for microfoundations. (As noted in an earlier post, Brian Epstein has mounted a very challenging argument against ontological individualism; link.)
Another reason that the microfoundations idea is appealing is that it is a very natural way of formulating a core scientific question about the social world: "How does it work?" To provide microfoundations for a high-level social process or structure (for example, the falling rate of profit), we are looking for a set of mechanisms at the level of a set of actors within a set of social arrangements that result in the observed social-level fact. A call for microfoundations is a call for mechanisms at a lower level, answering the question, "How does this process work?"

In fact, the demand for microfoundations appears to be analogous to the question, why is glass transparent? We want to know what it is about the substrate at the individual level that constitutes the macro-fact of glass transmitting light. Organization type A is prone to normal accidents. What is it about the circumstances and actions of individuals in A-organizations that increases the likelihood of normal accidents?

One reason why the microfoundations concept was specifically appealing in application to Marx's social theories in the 1970s was the fact that great advances were being made in the field of collective action theory. Then-current interpretations of Marx's theories were couched at a highly structural level; but it seemed clear that it was necessary to identify the processes through which class interest, class conflict, ideologies, or states emerged in concrete terms at the individual level. (This is one reason I found E. P. Thompson's The Making of the English Working Class (1966) so enlightening.) Advances in game theory (assurance games, prisoners' dilemmas), Mancur Olson's demonstration of the gap between group interest and individual interest in The Logic of Collective Action: Public Goods and the Theory of Groups (1965), Thomas Schelling's brilliant unpacking of puzzling collective behavior onto underlying individual behavior in Micromotives and Macrobehavior (1978), Russell Hardin's further exposition of collective action problems in Collective Action (1982), and Robert Axelrod's discovery of the underlying individual behaviors that produce cooperation in The Evolution of Cooperation (1984) provided social scientists with new tools for reconstructing complex collective phenomena based on simple assumptions about individual actors. These were very concrete analytical resources that promised help further explanations of complex social behavior. They provided a degree of confidence that important sociological questions could be addressed using a microfoundations framework.

There are several important recent challenges to aspects of the microfoundations approach, however.

First, there is the idea that social properties are sometimes emergent in a strong sense: not derivable from facts about the components. This would seem to imply that microfoundations are not possible for such properties.

Second, there is the idea that some meso entities have stable causal properties that do not require explicit microfoundations in order to be scientifically useful. (An example would be Perrow's claim that certain forms of organizations are more conducive to normal accidents than others.) If we take this idea very seriously, then perhaps microfoundations are not crucial in such theories.

Third, there is the idea that meso entities may sometimes exert downward causation: they may influence events in the substrate which in turn influence other meso states, implying that there will be some meso-level outcomes for which there cannot be microfoundations exclusively located at the substrate level.

All of this implies that we need to take a fresh look at the theory of microfoundations. Is there a role for this concept in a research metaphysics in which only a very weak version of ontological individualism is postulated; where we give some degree of autonomy to meso-level causes; where we countenance either a weak or strong claim of emergence; and where we admit of full downward causation from some meso-level structures to patterns of individual behavior?

But is this enough? There are weaker positions that could serve to replace the MF thesis. For now, the question is this: does the concept of microfoundations continue to do important work in the meta-theory of the social sciences?

- Microfoundations And Causal Powers
Image: Three Mile Island control room There isn't a lot of cross-over between the microfoundations literature (Peter Hedstrom, Dissecting the Social: On the Principles of Analytical Sociology) and the causal-powers literature (Greco and Groff, Powers...