﻿ Rocky US-Japan relations - but better thanks to China
Social Sciences

Rocky US-Japan relations - but better thanks to China 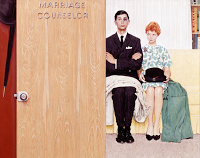 Just when the US-Japan relationship looks like it's on the rocks, along comes China to remind the partners that staying together is better than splitting up.

Every year, the Yomiuri Shimbun, Japan?s largest daily newspaper, and Gallup carry out a joint opinion survey in Japan and the United States of views toward each other.

The 2010 poll, released Dec. 22, was conducted Dec. 3-5 in Japan and Nov. 30-Dec. 6 in the United States. The latest poll shows that a year of friction between the US and Japan over alliance issues ? most notably the inability to settle a long-standing argument over the relocation of a US Marine base in Okinawa ? has taken its toll.

Whereas last year?s survey found a rising level of good feeling toward each other by Japanese and Americans, this year?s poll shows rapid erosion in positive Japanese views toward US-Japan relations. A record 40% of Japanese saw the bilateral relationship as being in bad shape, almost double last year?s figure, and only 33% felt positive about the current state of relations. Although Americans were more sanguine, 49% deeming bilateral ties to be in good shape, there has been erosion in positive perceptions in the US, too.

DPJ disappointing performance
The poll?s results may reflect the state of politics in Japan under the new ruling party. Since winning the Lower House election in August 2009, the Democratic Party of Japan has failed to show the Japanese electorate that it can run the country better than its predecessor, the Liberal Democratic Party.

The first DPJ administration under Prime Minister Yukio Hatoyama ended in June 2010 when Hatoyama resigned for reneging on a campaign promise to relocate a US base out of Okinawa and for a personal money scandal. But his successor, Naoto Kan, has not done much better, having alienated the public over perceived domestic and foreign policy failures in the latter part of 2010.

Kan led the party to an ignominious defeat in the July election in which the DPJ lost its Upper House majority. In every opinion poll, Kan has followed in his predecessor?s footsteps, losing almost totally the support of the public -- he is at the lower 20% level now ? for not delivering on key campaign promises to the electorate and mishandling key policy issues, including reviving a lackluster economy. Economic growth for next fiscal year is predicted to be a dismal 1%, and unemployment, particularly affecting young people, has remained high (for Japan) at over 5%.

True, the alliance with the US is firmer now than at the start of DPJ rule, but Kan gets no credit for this, since the deepening of US-Japan security ties are thanks to blustering moves by China and saber rattling by North Korea.

Futenma fly in the ointment
For the first time in the long history of the survey, negative views outweigh positive views on the question of whether bilateral ties are good or not. In Japan, only 33% of the public thought US-Japan relations were in good shape; 40% said it was not; and 21% were just not sure. The results are in stark contrast to the 2009 survey, in which 48% of Japanese said bilateral relations were in good shape (an impressive 14 point jump from 2008?s low of 34%), a sign of the spirit of ?change? set off in Japan by the election of Barack Obama as US president. Only 26% saw the relationship as being in bad shape.

In the 2010 poll, although Americans were more upbeat about the bilateral relationship than Japanese, with 49% seeing it as being in good shape, and only 10% taking a negative view, there has been a slow deterioration in positive views since 2008 (53%). Somewhat disturbing, 37% of Americans in the 2010 poll said they could not tell one way or the other where relations were good or not. In the 2009 poll, 51% of Americans said that relations were good, and a mere 8% thought they were not. But here, too, on the question of whether relations were good or not, a significant 34% of Americans answered that they could not say, indicating confusion about the intentions toward the US of the new DPJ administration in Japan, a situation that seems to continue today.

Why have negative views returned? The controversy over the relocation of the Futenma Air Station, a US Marine base, to another site in Okinawa. The poll found 79% of the Japanese public feeling that this single issue had adversely affected US-Japan relations in 2010 (83% when the answers of the 40% who felt bilateral ties were in bad shape are disaggregated).

Asked about the future, only 15% of the Japanese public felt that US-Japan relations were likely to get better in the future. Still, only 11% said relations would worsen, and 71% thought things would not change ? a sign at least of commitment to the status quo in alliance relations.

Americans were somewhat more optimistic, with 35% saying that relations would improve in the future. But Americans may not be savvy about the Okinawa base dispute since only 6% chose the USFJ realignment as a major issue between the two countries. The most chosen topic with 26% of Americans was trade and economic issues, even though 2010 was relatively free of such troubles.

When Japanese were asked about the most serious challenges to US-Japan relations, 21% chose the issue of realigning US forces in Japan, stalled for years over the Futenma relocation dispute. Another 21% picked North Korea, and a significant 17% thought it was the development of trust relations between the leaders of the US and Japan. Interestingly, 11% of Americans chose the trust issue as a major challenge.

Good relationship based on trust
President Obama is held in high esteem by most Japanese and this factor would seem to be reflected in the answer this year to the poll?s question, ?Do you trust the United States?? In the 2010 poll, 52% said that they did, while 37% said that they did not. The recovery of Japan?s confidence in America has been a striking new development since the 2009 Yomiuri-Gallup poll after a long period of decline in which distrust consistently outpaced trust. Those Japanese who said they trusted the US jumped from a mere 32% in 2008 to 49% in 2009. The reversal undoubtedly reflected a favorable reaction to the Obama administration?s management of ties with Japan during his first year in office.

Rising Japanese distrust of the US between 2001 and 2008 can be attributed to such factors as the unpopular Iraq war, contentious US base issues in Japan, including incidents involving US personnel and the relocation of Futenma Air Station in Okinawa. Perceptions of US unilateralism, such as the US rejection of the Kyoto Protocol also played a role in the erosion of Japanese confidence in America. The reversal of this trend since 2009 can only be explained by the effect on public opinion of President Obama and his policies.

For Americans in the 2010 poll, 64% felt trust toward Japan, and 33% said they did not. American trust in Japan has always remained higher than in Japan, with only slight slippage over time. In 2009, 66% of Americans expressed trust in Japan in the Gallup poll, about the same as in 2008?s 67%. The high point for American trust in Japan was reflected in the 2006 poll, when the figure was peaked at 76%. Japan?s contributions to the war on terror, including the dispatch of troops to Iraq and the Indian Ocean, and the friendship between President Bush and Prime Minister Koizumi undoubtedly influenced Americans? confidence in their ally. The figure plummeted 15 points in 2007 to 60.8%, a sure sign of unhappiness with Koizumi?s successor Abe, his handling of the relationship, and a perceived rise in nationalism in Japan.

Both looking for security
Another key question in the survey each year is whether respondents think the US-Japan Security Treaty contributes to security in the Asia-Pacific region. In Japan, an overwhelming 76% of Japanese answered "yes" this year, up one point from 2009. The figure was a distressing 59.7% in 2008.

There is a growing sense of urgency about the security in the region reflected in the survey. In the 2010 poll, 85% of Japanese felt that the because of the territorial dispute with China over the Senkakus, Japan should cooperate deeply with the US against such moves.

Asked similarly about the usefulness of the treaty, 72% of Americans saw it as positively contributing to regional security, up dramatically from the 60% figure in 2009, when Americans were unsure about Japan?s dedication to the alliance.

China: Three's a crowd
China appears high on the security agenda for most Japanese, with 79% considering that country a potential threat in the future. In contrast, 58% of Americans felt that way. North Korea was at the top of the list, not surprisingly, with 84% of Japanese and 79% of Americans.

Views toward China deteriorated rapidly in 2010 due to the Senkaku island incident and other disputes. Only 11% of Japanese felt relations with China were in good shape, 14% said they were fair, and 72% viewed them as in bad shape. Last year 43% of Japanese felt relations with China were then in good shape, 31% thought they were bad, and 21% could not say which. On the trust factor, no Japanese would say they trusted China, 8% said somewhat, and 87% said not at all or not very much.

Only 24% of Americans saw ties with China in good shape, down sharply from last year?s 34%. Another 57% views relations as fair, and 17% saw them as poor. The gap between the two countries on trust in China remains wide, since 34% of Americans trust China either fully (2%) or somewhat (32%). But distrust was still quite high, with 36% not trusting China very much and 29% saying not at all.

It seems the US and Japan are stuck with each other, for better or for worse.

- America: Japan Loves You
Japan's back in love with America, is quite fond of South Korea - but has yet to find a place in its heart for China. In its annual survey for 2009 of Japanese opinions toward other countries, the Cabinet Office found feelings of friendliness toward...

- South Koreans Show Less Of A Cold Shoulder To Japan
A century of hurt can't be cured overnight, but the last five years have seen significant healing in Japan-Korea relations. A half-century after Japan normalized ties with the Republic of Korea in 1965, views by South Koreans toward Japanese remain...

- Poll Shows Perception Gap Between U.s. And Japan
Each November, the Yomiuri Shimbun, Japan?s largest daily newspaper, and the U.S. pollster Gallup carry out a joint opinion survey in Japan and the United States of views toward each other?s country and pending bilateral issues. The 2009 poll (appended...

- Poll: Gulf Still Wide Between Japanese And Chinese
The results of a recent opinion poll carried out jointly in Japan and China by the non-profit organization Genron NPO and a Chinese news agency underscore the deep-seated negative views that Japanese and Chinese continue to hold toward each other. The...